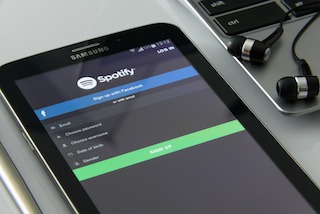 The AI Tech That’s Giving Spotify the Edge over Apple

Spotify’s tie-up with machine learning startup Niland has gotten users excited about the possibilities for further tailoring streaming music on demand and given Spotify a possible edge over competitor Apple.

Spotify’s latest acquisition could push it further ahead of rival Apple in the battle for superiority in the on-demand music streaming industry. In May 2017, the Swedish-born business announced that it had joined forces with Paris-based machine learning startup, Niland –  a business that’s already proven its nous in using AI to optimize music search and recommendation capabilities since its inception in 2013.

While Spotify and similar platforms have favored a technique called collaborative filtering – where music predictions are made based off of a user’s previous track selections – Niland has pioneered a machine learning alternative that extracts meaningful information from raw music content in order to create a nexus of styles, genres and artists that a specific user may like.

The news has left Spotify fans eagerly anticipating new features to a software that has already received plaudits for intuitive in-program designs such as Daily Mix and Discover Weekly.

Apple Music – Spotify’s biggest competitor in the industry – has been less keen to adopt AI techniques, instead preferring a more personalized approach in the form of Beats 1 – a 24/7 radio station owned and operated by Apple.

However, even though Apple has gone to the lengths of employing superstar services from the likes of Dr. Dre, Pharrell Williams and Elton John, it’s still lagging behind Scandinavian rival Spotify, which boasts 50 million subscribers compared to Apple’s 20 million.

Of course, Apple is a company that is never easily beat, but as Spotify forays further into the world of AI, it could be about to unleash a wave of new, ingenious features that put further that allows it further edge on the on-demand music streaming industry.

Business
Artificial Intelligence
Machine Learning
The Rise and Risks of Ancestry Tests
Facebook Wants to Share Your Thoughts from Your Brain
Amazon and the Convenience Crusade
Through the Lens: A look at the future of photography
See More

A New Generation of Work
Do You Want Automation with That?
Why Kindness Makes for Better Business
Beyond the Bags: Shopping changes its focus
See More

The future of translation through the eyes of a professional
The Rise of Robots: How new AI employees will affect jobs
Need to disconnect? Technology can help you with that
The Sharing Economy Could Still Be Either Boom or Bust
See More