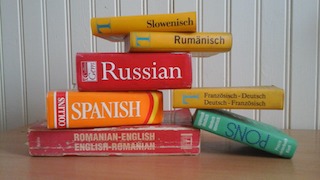 The future of translation through the eyes of a professional

Google and Microsoft are offering new consumer-based software and hardware that seek to improve the quality and user accessibility in translation. That might mean humans and machines can have meaningful stakes in the industry as it moves ahead.

One of the biggest questions surrounding the age of automation is just how far-reaching it will be. It remains to be seen which industries will be most affected, and which roles will be displaced by machines. It’s a question that V1 is attempting to answer in its upcoming report, “The Future of Work”.  By speaking with experts, executives and analysts from a range of different industries, we’re hoping to gain an inside view on the real-time effects of automation, and what the ultimate implications will be.

The reach of automation is a subject we’ve already been exploring in our online magazine. What’s the potential of AI, and what changes are we already seeing? We spoke with professional translator Lyse Leroy on the impact that technology is having on her industry, and whether machines could one day permanently replace human translators.

The big question facing many workers right now is whether technological advances will help or hurt them on the job front. It’s a legitimate question, especially since nobody yet knows what automation and artificial intelligence will mean in their careers. One certainty, though, is that the innovative advances ahead and disruptors stand to bring billions of dollars in growth to industries of all kinds.

Translation is no different. New software and hardware are constantly being developed, improving in both quality and user accessibility. The latest offerings from tech giants like Google and Microsoft are consumer-based, though, rather than aimed at those seeking professional translations, suggesting that there could be room for both humans and machines in the industry’s future.

To find out more, V1 spoke with Lyse Leroy – a professional translator of English, German, Italian and French. And while she’s happily embraced much technological change throughout her career, she remains skeptical  of the ultimate potential of translation tools, and optimistic about her own role.

What are your thoughts on the latest wave of translation technology? How effective do you think it is?

“I think it could work for some linguistic combinations like French-Italian or Spanish-Portuguese – languages thatare pretty close. But I have big doubts about Chinese-French, languages like that. It’s algorithms. It’s grammar, it’s syntax. A word is a word.”

Given the current level of technology in translation, what’s missing? Why do we still need human translators?

“Context. You need to understand things in context and I don’t think a machine can analyze that. It’s simple things. When you look up the word ‘calm’ in the dictionary, in French you will have calme, apaiser, paisible. There are loads, so how do you choose? And that’s when your brain comes in. I don’t think a machine knows which one to use in a certain context.

“And in terms of cultural references, there’s no way that a machine can do that for now. Getting the tone of the text, as well – the intonations, sarcasm, irony, puns. I haven’t seen a machine do it, so I’m very skeptical.”

Professional translators are more in-demand now than ever before. Do you think this is down to globalization?

“Yes, definitely. Anything that happens in politics has to be written down somewhere. Everything has to go through writing at some point, and then translation. There’s more and more communication as well, because people are asking for transparency. There’s more demand for translation, and there’s more demand for quality in translation. The political aspect is obvious. When something happens like Brexit – I never had so much work as after that, because all the banks I was working for were planning on stock markets crashing. There was loads to write about.”

What does the future of translation look like? Will machines play a larger part in the industry?

“I do think that, at some point, we will be able to use machines for technical translations, like step-by-step guides, how to set up your TV, things like that. Even medical things. I think that will be taken over to a certain extent by machines. But I think that everything else that has political impact, you have to be really careful about. You can’t mis-translate. And everything to do with creative writing. I think they’ll still be a lot of work in that area.”

Do you think there’s a limit to the potential of translation tools?

“Yes, I do. I don’t know if it’s me being too skeptical about it or optimistic about my job, but I don’t think, for example, a robot will ever be able to translate a book without really diminishing the quality of the work. You can put a whole text into Google translate, and some of it will make sense, but you will miss all the tone, metaphors, images and references. [A machine] doesn’t have the sensitivity yet to interpret and be able to translate. For me, right now, that’s the limit. It’s interpretation.”

UX as a competitive advantage: An interview with Jessica Ivins
What You Need to Know about AI in Advertising
A New Generation of Work
Do You Want Automation with That?
See More