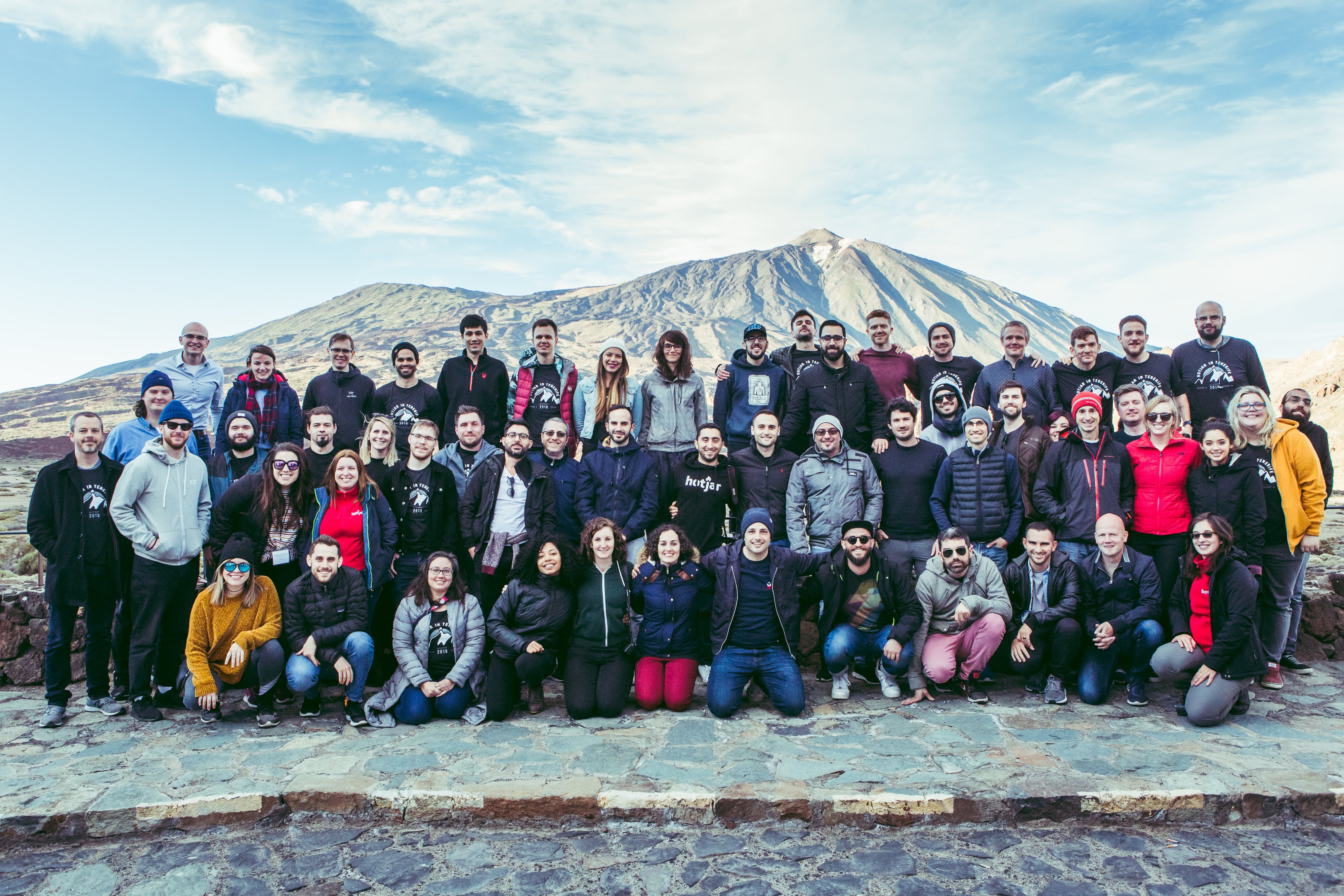 Agility in business, and the pros and cons of remote teams

Understanding consumer behavior is one of the most important and yet challenging issues facing today’s business leaders. While it’s easier than ever for an organization to reach an audience through digital channels, there’s also more competition for consumer attention, and evidence to suggest that consumers are becoming increasingly tired of the same marketing techniques.

Enter Hotjar. Founded in 2014 by five Malta and Swedish-based entrepreneurs, Hotjar gives companies a way to learn more about their website visitors’ site use by letting them see how visitors navigate the website, where they spend their time and when they’re dropping off. It also surveys site visitors to help organizations better understand their audiences.

Hotjar is on the forefront of the changing business-consumer relationship. It now has over 200,000 users from 190 countries, including Nintendo, IKEA, Panasonic, Columbia and T-Mobile. And in its four years of operations, it’s had to manage rapid growth, new regulations and a remote workforce scattered all around the world.

To find out more about Hotjar and what makes the company tick, V1 sat down with the company’s vice president, Ken Weary.

It’s all about agility

Consumers’ attitudes toward businesses are changing, says Weary, and organizations need to react accordingly. The shift is being driven by the abundance of choices customers have, and the fact they don’t have the brand loyalty of previous generations.

“The biggest aspect in consumerism that I've seen, more than anything, is choice, and choice driving the aspect of the providers to need to be much more agile,” says Weary. “Consumers are obviously now caring about many, many more things, such as social values and environmental issues. It’s causing people to be a lot more fickle and less loyal to a brand, which I think is a fantastic thing for consumers. It’s a fantastic thing to drive competition and to put those businesses that rest on their laurels on the shelf a lot quicker.”

Weary says that Hotjar was created to help businesses tackle this issue, by allowing them to better understand their consumers, and adapt according to how those consumers react to their websites.

“The mission of Hotjar is to democratize the way the web is built based on user analytics and feedback, meaning those individuals that come to your website are going to tell or show you how they're using your website, so that you become more informed.

“At the end of the day, if there's friction on your website or in your service, you're going to lose customers. And so how do you optimize that? You don't optimize it by telling the customer what they have to do. You optimize it by listening to what they're telling you and recognizing, ‘Does their input and perspective merit change?’”

New rules to play by

New rules and regulations can have an impact on any business, and Hotjar is no exception. In May 2018, the European Commission introduced a new set of rules that changed Europe’s privacy laws. The new rules, called General Data Protection Regulation (GDPR), mean that complying organizations have to ensure that personal data is gathered legally and under strict conditions, and that organizations that collect and manage it will be obliged to protect the data from misuse and exploitation.

And while the regulation is a European one, it affects businesses all over the world. Any company that has a web presence and markets products or services online will likely need to comply with the new rules.

“It was huge,” says Weary on the impact that GDPR had on Hotjar’s operations. “We've always been a privacy-centric organization. For instance, we've never shared IP addresses of visitors or anything like that, but GDPR took that to the next level.”

One of the biggest challenges that Weary and the team at Hotjar faced was making sure that their clients could continue to use the software while being compliant with GDPR rules. “We decided there’s no one-size-fits-all for GDPR, so we gave our customers the option to tweak settings based on their needs,” says Weary. “We tried to really say, given the diversity of our base, ‘What do our customers need in order to still get value from our tool, but be compliant?’ And we recognized that's going to be different, and so we gave them scalable options.”

Weary says that some of Hotjar’s customers were concerned they would no longer be able to use the tool while complying with the new GDPR rules. “We tried to circle back with them and give them information they can provide for their legal team,” says Weary. “But there were some organizations and companies that definitely saw the legislation to be risky for them. And we respect that. That's, again, why we tried to make it as scalable as possible with as many variants that they can apply.”

The secrets of remote work

Hotjar’s founders decided from the start they would be a remote work company. Weary explains that’s because the founders didn’t want to limit themselves to local talent. And Weary sees major advantages in working with a remote team. When Weary joined Hotjar in June 2016, there were just over a dozen employees. Now, there are over 70, including workers from 19 different countries. They bring different cultures and diversity to the group, he explains, and that’s enriching for the working environment.

But that doesn’t mean Weary believes that remote work is the answer for every organization. He says it’s not black and white, and that remote teams work better for some companies than for others.

“I think that the argument of ‘Are we more productive because we're remote?’ is the wrong question,” says Weary. “The aspect really is, how do you empower your team, and how do you give them the right amount of autonomy that's needed for them to do the job? You can do that without the team being remote. In certain cases, being remote can damage productivity. In other cases, remote work accelerates productivity, because of lack of distractions.

“I think that the biggest detractors to remote work are the biggest remote work advocates. Meaning when they're not careful, they over-evangelize how great remote work is, not recognizing that the elements of remote work that make companies like Hotjar so great, such as transparency and trust, can exhibit just fine in a brick and mortar company. It's really about what is the best way for a working environment to be successful, and remote may not be what's needed or appropriate given your business model, but I’d encourage everyone to give it strong consideration.”

Weary is confident, however, that it’s possible to build a strong team culture with workers who aren’t meeting face-to-face in the office every day. A remote work team, he explains, can easily emulate the culture of physical office environments – it just takes a little imagination.

“You look for those opportunities to make sure you are giving avenues and promoting the activities that are desired by either the executive team or the company,” says Weary, who’s worked on and off as a remote worker for the last ten years. “We have a meeting cadence where every department does a daily scrum, and a weekly retrospective and demo to the company. We're all about getting stuff done and being able to promote that. But how do we promote some of this watercooler aspect? We came up with two different things. Number one is, every Wednesday we have what we call the team bonfire. It’s a chance to talk about a variety of different topics. We mix it up. Sometimes we play games, we do online charades. Sometimes we ask, ‘What are your favorite holiday traditions?’

“There are multiple ways to slice it. If you focus too much on how you can't emulate a brick and mortar office environment, I think it's a shortcoming, as opposed to saying, ‘I wonder how we could do that.’”

Related Posts:
V1. Editions:
Leadership
The Future of the Office: How millennials are driving change in the workplace
Building a strong work culture with a remote team
Engage: A look at remote work in 2019
Overcoming the issue of remote work and boundaries

Leadership
Remote Work
Interview
Business
Future of Work
AI and the City of the Future
How AR Could Usher in the Age of the Autonomous Vehicle
Emoji in business. When is it okay?
Future of Brain Computer Interfaces: An Interview
See More

Musical Desks: Today’s offices are on the move
The future of translation through the eyes of a professional
Sensitive Seating and What Your Desk Could Say about You
Your Desk Will See You Now
See More