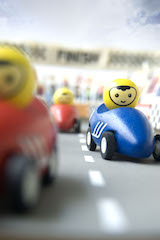 Babies, start your engines. Formula One racing technology is now being put to use to help transport newborn babies. The Babypod 20, developed by Advanced Healthcare Technology Ltd. and Williams Advanced Engineering, is a lightweight box with a sliding lid and foam interior made to transport sick infants by car or air.

In a recent press release cited about the project, Craig Wilson, Managing Director of Williams Advanced Engineering, which is part of the UK-based Williams 1 team, noted that Formula One cars and transport devices for babies “both demand a lightweight and strong structure that keeps the occupant safe in the event of an accident, and can monitor vital signs whilst remaining easily transportable and accessible.”

Made of carbon fiber and able to withstand a 20 G-force crash, the device, which builds on a previous Babypod II, has been in the works since 2015.

And this is far from the first time that race car technology has made its way into other industries. McLaren, which makes high-performance sports cars, took technology usually applied to its cars and used it to design a plate that can protect people’s insides. The project came about when a driver connected with McLaren Applied Technologies sought to discover how to better protect himself after a surgery that left parts of his chest vulnerable.

McLaren also previously used its data management and simulation techniques from its Formula 1 experience to help make Heathrow Airport more efficient in terms of how long planes circle the airport and how they move on the ground.

And the race is on to see what’s next, as Formula 1 technology certainly seems to have a lot to offer the future.

Technology
Babel Fish is now a reality with translation direct into your ear
Would You Chow Down on a Robot-Made Salad?
The Rise and Risks of Ancestry Tests
Emoji in business. When is it okay?
See More

The AI That Recreated Obama
Let It Grow: How Artificial Intelligence is helping Agriculture
The Rise of the Robo Advisor
What’s Next? The Question of Live and Let Die.
See More

Disruption, Automation and the Future of Wealth Management
The Billionaire Players in the Mars Space Race
Why Kindness Makes for Better Business
Building a strong work culture with a remote team
See More

The Role of Emotional Intelligence in the Age of AI
What’s Next with UX?
Overcoming the issue of remote work and boundaries
The Human Touch: Role of humans in the future of translation
See More