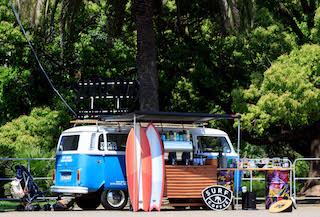 Supermarket on Wheels and the Big Revolution in Retail

Instead of consumers going to the store, the store could come to them. An AI-driven supermarket that can be summoned by app and offer mobile purchasing is in the works. It’s one of a number of services that are moving toward being offered on the go.

Swedish startup Wheelys has designed a self-driving supermarket. The Moby Mart is designed to be completely autonomous, manned only by an artificial intelligence (AI) assistant in the form of a hologram. The store keeps track of its own inventory and takes itself back to the warehouse when it needs to restock.

Customers can summon the store using its accompanying mobile app, which also allows them to enter. Once inside, they can pay for items by scanning them on their phones. The AI assistant can answer their questions and also recommend recipes, while storing data about individual users and their shopping habits.

Eventually, if a number of Moby Marts were in operation, they could form a network which could gather and analyze customer data. The network of stores could learn how demand varies in different locations and adjust in-store stock accordingly.

Moby Mart’s chief technology officer has said that the retail industry is on the cusp of a “big revolution” thanks to the latest technology around self-driving cars, mobile payment, data analysis and the wireless tagging of stock. And Wheelys thinks that the Moby Mart will be a big part of that, predicting that one day everyone, including big retailers and communities, will use self-driving supermarkets.

A manually-driven version of the store has been trialled in Shanghai, and the company has sold six units so far. The Moby Mart’s self-driving technology, which is being developed in partnership with the Hefei Technical University in China, can only be incorporated once government legislations allow it.

As we get closer to self-driving vehicles becoming legal, we’re likely to see more examples of services that travel to the customer. Seattle innovation agency Artefact has already created a concept for a self-driving medical clinic that can travel to a patient. The vehicle can perform basic health assessments and would be stocked with common medical supplies.

Innovation
The Home of the Fourth Industrial Revolution
Amazon and the Convenience Crusade
Drone Domination: The company looking to rule the skies
Babies, Start Your Engines
See More

Gen Z: Young people who are all text and no talk
Are High-Tech Toys the Key to Educating the Next Generation?
Smile! Here's how facial recognition is changing China
2030 and the City That 3D Printing Built
See More

CEOs: Technology to look out for in 2018
A New Intelligence in the Boardroom
Why Kindness Makes for Better Business
UX as a competitive advantage: An interview with Jessica Ivins
See More

Where’s my office? A guide to the Remote Worker’s space
AI and recruiting
The Inside Track on Place Branding with José Filipe Torres
The Advertising Agency of the Future
See More